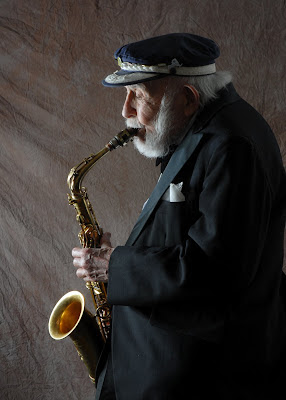 Owing to the imminent closing of the Sego Cafe at 291 Main St., Oneonta, sax virtuoso Al Gallodoro will be playing his last gig at the venue this Saturday, March 22, 8-11 PM. Arrangements are being made to host Al and his Quartet elsewhere in the vicinity, but this marks the end of his four-year run at the delightful and intimate Sego. (Press release to follow.)

At nearly 95 years young Gallodoro continues to thrill his listeners with his impeccable musicianship and incredible mastery of his instruments. His admirers include more than just saxophone aficionados--he recently appeared twice at Cornell University's Weill Medical College for concerts AND as the subject of an extensive interview on longevity and vitality. Gallodoro was called upon in April 2006 to perform George Gershwin’s Rhapsody in Blue with the NYC Harmonie Ensemble, with conductor Steven Richman, a piece which Al performed many thousands of times with Paul Whiteman during their long association. This Gallodoro 2006 performance of Rhapsody in Blue is in the works, we will sent you a release date in a future e-mail! Also check the web-site for a preview of Al's soon to be released new CD: Moment in Time (Birmingham Live 1969).

Al is one of only 13 artists who recorded before 1940 that is still active and recording, During a professional career spanning an amazing nine decades, Gallodoro has played his saxophone, clarinet and bass clarinet in all forms and venues of music--from Vaudeville houses to New Orleans speak-easies, from nightclubs to symphonies, from Carnegie Hall to international jazz festivals (North Sea and Breda, Holland!) and even the Ringling Brothers Circus! In his association of nearly 4 decades with Whiteman, Gallodoro played lead 1st alto sax, as well as clarinet and bass clarinet for the orchestra; hence, the moniker “Triple Threat!” He was a regularly featured “front stage” soloist on live broadcasts spanning from the 1930’s through the 1970’s, and even continues those live radio performances today with regular appearances on Northeast Public Radio! In fact, Gallodoro has done more live on-the-air saxophone and clarinet solos than any other performer in history.

Also a classical performer in his own right, Gallodoro worked for many years under symphonic conductors Arturo Toscanini and Leopold Stokowski. Thus, one can often detect a classical vein running throughout his art of improvisation. Ferde Grofé was so impressed by Gallodoro’s art that he composed Gallodoro’s Serenade for saxophone and piano (1957) to specifically emphasize Al’s style, and showcase his technique. The piece (released on Bridge Records, 2006) had its premier New York City performance and recording when Al was an energetic 91 years old, with pianist Lincoln Mayorga. Perhaps it is his unique ability to bridge jazz and classical idioms that so endears him to a broad variety of fans.

AL GALLODORO was featured in 2002 on CBS’ Sunday Morning, and has also been the topic of a PBS documentary, the Al Gallodoro Story. In 2005 Alfred J. Gallodoro received an Honorary Doctoral Degree from Hartwick College in recognition of a lifetime of extraordinary achievement in music performance and teaching. He can arguably be regarded as the greatest saxophone/clarinet virtuoso in history.

As partner with manager/pianist and long term collaborator JoAnn Bertone Chmielowski, Gallodoro’s independent label Chmusic Productions/Golden Rooster Records Al has added 5 CD’s and a music video to his credit. His most recent release DAYBREAK – Lyrical Jazz (April 2007), has a specific goal: to bring a renewed awareness of the lyrical sound of the saxophone to mainstream jazz. With a bit of Southern flair, credited to his Birmingham and New Orleans roots, the Mediterranean influence of his Sicilian heritage, and the sounds attributed to nearly six decades of working in New York City, Dr. Alfred J. Gallodoro (born June 20, 1913) is still absolutely inimitable! More extensive information can be found at www.algallodoro.com
Posted by Andy at 3/18/2008 12:58:00 PM