Just over three years ago I went way out on a limb with a theory about the identity of Tempo King. I extrapolated that he was actually a vocalist by the name of John Arcesi (1917-1983), who at that time (1936) had recorded with Louis "King" Garcia. My basis came from the Tempo King and Louis Garcia groups having Joe Marsala in common. Joe Marsala lived in the same apartment building as Joe Venuti, who employed Arcesi (then working under the name Don Darcy) as his band vocalist. Venuti was also known to enjoy a good practical joke.

However, here (from vintage sheet music) is a photograph of Tempo King (many thanks to Randy Skretvedt): 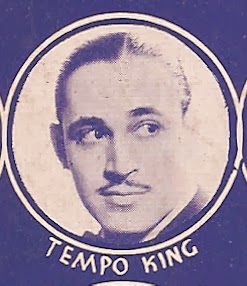 And here is a publicity still of Don Darcy (John Arcesi) borrowed gratefully from eBay: 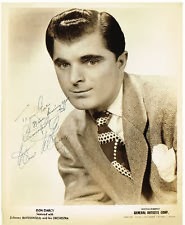 They are obviously not the same person. In further scouring my available reference sources, I find a date of death cited for Tempo King of June 25, 1939. I find no further reference to that other than the entry in Roger Kinkle's The Complete Encyclopedia of Popular Music and Jazz 1900-1950.

King's putative birth year was 1915, and I saw another reference to "intestinal complications" as the cause of death. None of the above stated may be quite accurate, of course. I sincerely apologize to all those who followed me down this bumpy dead-end lane of speculation, but at least we had some good tunes along the way.

His real name might have been Temple King. He's billed that way on a 1936 Columbia date with Frank Froeba's Swing Band.