TWO MINDS WITH A SINGLE THOUGHT

The April 11, 1912 issue of Life magazine features the following cartoon panel, "The Master of the House" (featured as part of the center spread, "Frieze for a Bachelor's Apartment" by A.B.Walker): 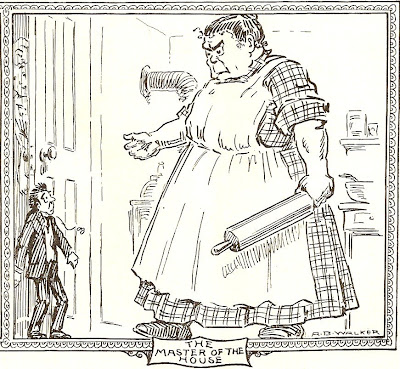 I immediately found myself wondering if a 17-year-old James Thurber had seen the cartoon, only to have it lodge in his subconscious until the 1930s, when he drew this famous image: 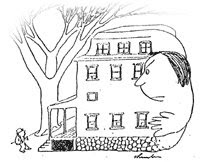 Thurber's "House and Woman" is the better drawing, of course. He takes the idea to a brilliant level of surrealism. But it is the same idea.

Then again, I sometimes find my own spongy gray computer dislodging remembered bits that seem so much like my own inspirations. And I can't draw worth a damn.

ADDENDUM: In the first image, there seems to be another giant woman behind the door. It complicates the panel, and leads to too much speculation about the narrative. As Thurber knew, simple dread is enough.